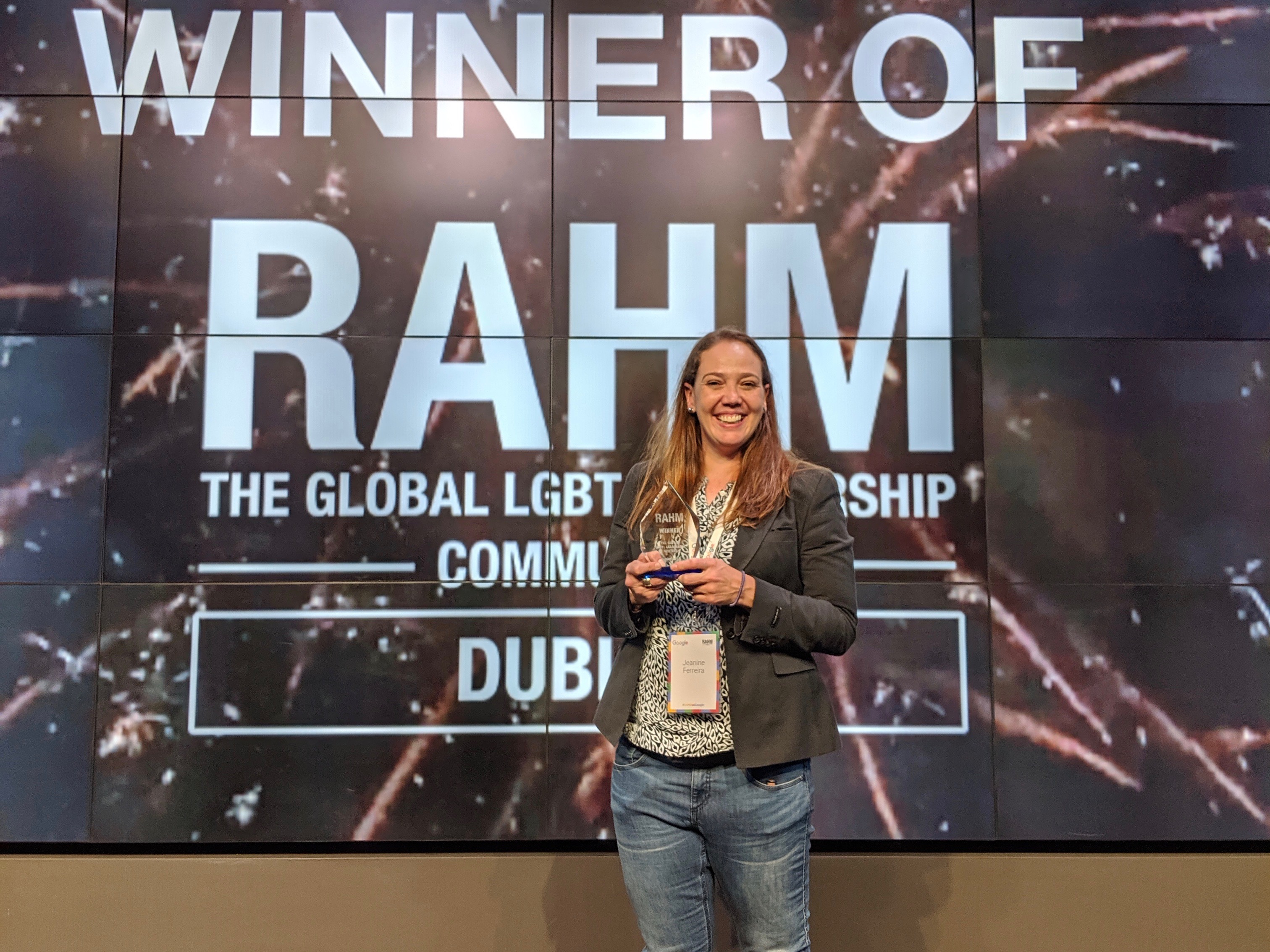 “The future is female. We will be there.” – interview with Jeanine Ferreira

Jeanine Ferreira – winner of the RAHM Contest in Dublin 2019 – talks about her RAHM adventure and the effect it had on her personal as well as professional life. She also addresses her experiences with the corporate world in South Africa as LGBT+ women.

I was born and raised in South Africa and grew up in a small town in the Northwest Province. I studied Business Communications and have been lucky enough to grow my career in exceptional, international businesses, being surrounded by people who believed in me. I have 13 years’ experience in Commercial, Digital and Brand Marketing across automotive, IT, finance and most recently telco.

Sara: Jeanine, you just won the RAHM Contest in Dublin, congratulations on convincing the other contestants and the jury alike. What has changed for you since/ How did it feel?

Jeanine: The format of this competition just reminded me again that (wo)man is not an island. Relying on strangers to judge your abilities and leadership skills is daunting. I don’t think as leaders we look in the mirror enough to see how we show up… Since winning the contest, I have been acutely aware of the responsibility I have to be an example and role model for other LGBT+ professionals. It has put extra pressure on me, but it is something I accept with open arms. Someone fought for me to be here. I am dedicated to being someone’s someone.

People still get uncomfortable when I speak about my wife and kids, my family is described as “alternative”…So I continue… and I will do that until we get the same respect.

You are one of the youngest female executives in Vodacom and the most senior “out” leader in the company. Despite your strong position, what difficulties are you exposed to on a daily basis being an LGBT+ in corporate South Africa?

In South Africa, the marginalisation does not stop with LGBT+ professionals. Women are still fighting for their rightful position at the table too. We have come a long way, but it takes time to change a society. Patriarchy is still very rife and it rears it’s head every now and then, even in boardrooms. People still get uncomfortable when I speak about my wife and kids, my family is described as “alternative”…So I continue… and I will do that until we get the same respect.

The future is female. We will be there.

As an LGBT+ woman, how do you experience your position of being a role model for young employees?

I feel the role of LBT women in the LGBT+ society has changed over the last couple of years. Historically, we played a supportive role and were happy to do so. Expectations and goals have changed and we are stepping up to the challenge. Young women want to see someone like them succeed whilst being different and comfortable in their own skin. Being able to bring your whole authentic self to work does not only make you happier, but it is proven to increase productivity. The future is female. We will be there.

In comparison to the current situation in Occident – e.g. Prince William’s unwavering support to the LGBT+ community (source) – how would you describe the perception of the LGBT+ movement in South Africa? What would be the major issues that need to be addressed?

South Africa has a fantastic constitution. The LGBT+ community is legally protected, we are, by law allowed to get married and have equal rights to everyone else in the country. The issue is that these rights were legally obtained and not voted for by society. I am not 100% sure that we would have been in the same situation if we had a referendum like in Ireland for example. There is still a big undertone of homophobia. Issues like corrective rape are not being dealt with efficiently and the perception that being gay is “unafrican” or against religioun are still very prevalent. There is however a younger generation rising that is going to change things. Watch this space…

You have worked in many big companies such as Vodafone and Peugeot. What are the differences you felt in the perception of diversity and inclusion?

Vodafone is the best company I have ever worked for with regards to diversity and inclusion. They have made a concerted effort to offer an equal playing field to their employees, regardless of gender, race, orientation or disability. Various CEO’s and MD’s have stood up and pledged their support in public. Former Group CEO Vittorio Colao started a movement with Nick Read now taking it further. The late Bob Collymore, took a stand in Kenya where it is not popular to support the community.

Vodafone is a top employer for LGBT+ inclusion and it is an accolade we are very proud of! I have also had the opportunity to engage with other International companies and must give a shoutout to Google, Accenture and EY for their fantastic programmes and policies.

I also got the acknowledgement that I can be exactly who I am and be taken seriously, which is something I think we all struggle with at some stage.

How do you think the RAHM Contest is going to impact your personal and professional life? What are your greatest take-aways from the Contest?

Personally, I have made so many new friends, my life will never be the same again! I also got the acknowledgement that I can be exactly who I am and be taken seriously, which is something I think we all struggle with at some stage. Professionally this was an experience that I wish I could give all LGBT+ professionals. Being taken out of your comfort zone and having your boundaries pushed like that, makes you see things differently. You are forced to take a stand, be innovative and creative and really dissect current LGBT+ issues to find workable solutions. Walking away with a great network, mentors, coaches and opportunities is really the cherry on top!

Join our RAHM Community or apply for the RAHM Contest 2020:  To the application form!